Showing the Chesapeake Bay Some Love 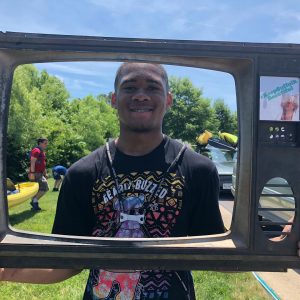 Volunteer with “Stevie” a fun selfie frame created from a TV found during a Keep Suffolk Beautiful clean-up.

Those are some pretty great reasons to show the Chesapeake Bay some love! With a watershed of about 64,000 square-miles, there are many challenges to keeping the bay healthy. Local governments in Hampton Roads are working hard to reduce the major sources of pollution in the bay (nitrogen, phosphorus and sediment) through implementation of TMDLs (total maximum daily loads). But there are other threats to the bay’s prosperity and one of those is litter.

Almost all litter found in the bay started out on land. Wind can carry litter away but often it is rain that washes litter into storm drains, ditches and stormwater ponds then out to local rivers. For 30 years, thousands of Virginians have joined together on the first Saturday of June to clean harmful litter and debris from land and water. Under the leadership of the Chesapeake Bay Foundation, volunteers pull THOUSANDS of pounds of litter out of the environment in just THREE hours. In 2017, over 100,000 pounds of litter were removed! The statewide numbers are still being tallied for 2018, but locally we are happy to report that, in Hampton Roads alone, more than 2,200 volunteers gave their time to remove over 33,000 pounds of litter from our communities.

*Not all localities have reported at time of publishing. 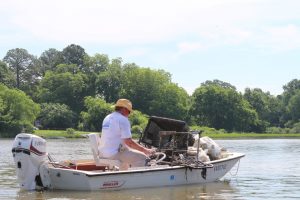 Waterway clean-up in Norfolk for Clean the Bay Day.

When you imagine what volunteers were picking up you may think of fast food wrappers and soda cans. Maybe cigarette butts and plastic bags. But participate in a clean-up yourself and you’ll quickly learn that all kinds of weird things end up as litter. During this most recent clean-up, Hampton Roads volunteers found tractor tires, crab pots, mannequins, appliances and even a baby raccoon living in litter. Sadly, there’s more to be done. Grab your neighbors, your coworkers or even your book club and organize a Team Up 2 Clean Up event in your community! There’s no better way to show your community, and the Chesapeake Bay, some love.