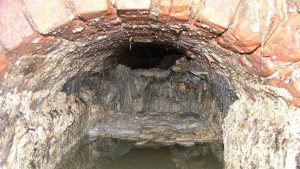 Recovered from the sanitary sewers of Whitechapel by the Thames Water engineers in February, an 820 foot long, 130 ton block of congealed grease, wipes, garbage and human waste became one of the museum’s most popular exhibits. Fascination and revulsion have been the reactions to this piece of urban history, often referred to as a “fatberg” that has boosted visitor numbers. Being an organic mass, the lump has begun to sweat and change color and flies have hatched in it.  The museum is considering whether to keep it or throw it away.

The original block was longer than the London Tower bridge and weighed almost as much as a blue whale. It took nine weeks to break up the blocks with drills. The rest of the monster fatberg was chopped up and converted into bio-diesel.

The museum curator recognized that people are responsible for it. The public has connected with the idea that consumer behavior and consumption creates fatbergs. Children’s stories have been written and a fatberg musical is being developed.

Intrigued? Read more about the London fatberg at BBC News.

Blog contributed by Jerry Hoddinott  of Chesapeake Department of Utilities.