People normally don’t celebrate wastewater treatment.  I would argue that it should be celebrated every day, after all, the ability to get clean water piped into our homes and dirty water piped out of them is what separates us from third world countries.  Turn on the tap and voila!  Clean water.  Flush the toilet and poof!  Dirty water goes away.  Amazing.  In fact, people are often so overcome by this amazingness that they don’t stop to think about what happens to make all that dirty water “go away”. 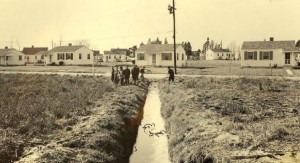 Raw sewage ran in open ditches as children played in Portsmouth’s Simonsdale neighborhood in 1944, documenting the need for construction of a sanitary sewer system.

It hasn’t always been so amazing.  The plumbing in many homes in Hampton Roads used to lead directly to local waterways.  As more people moved to the area, more sewage poured into our rivers and the Chesapeake Bay.  By the mid-1920s, it was estimated that about 25 million gallons of raw sewage was poured into local waters daily.  Sewage pollution was a big problem.  More than 10,000 acres of oyster beds were condemned and people were worried about potential typhoid and cholera outbreaks.  I know, it seems crazy because it WAS crazy.  Back then, a day out on the water was essentially a day spent in the sewer.

Water is everywhere in Hampton Roads.  If you grew up around here like me, it’s easy to forget that underwater tunnels are not a required part of the morning commute for a lot of people.  But that’s Hampton Roads and that’s why we love it (I love the water, not the tunnels), and that’s why a regional solution was needed for sewage pollution.  Sewage literally flowed across city and county lines, lines that were frequently changing at that time, and everyone needed clean water.  And that’s why, on November 5, 1940, citizens voted for the creation of HRSD as a regional solution to the sewage pollution problem.  Together with the local counties and cities, HRSD began to build infrastructure to collect and transport sewage to treatment plants so that only cleaned water was sent out into waterways. 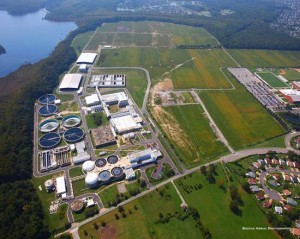 So, happy 75th anniversary to HRSD!  Give thanks for the lack of water-borne diseases, carefree days at the beach, or your love of locally harvested oysters.  Celebrate by learning about the public water systems in Hampton Roads, reading more about HRSD’s history, or watching a video about the wastewater treatment process.  Check out data from a HRSD pipeline and spread the word about all this amazingness that happens under your feet.  And of course you can be part of the HRSD legacy by helping keep sewage in its place.  Know what to flush and please don’t treat your drains like trash cans because there is nothing amazing about clogged pipes and sewage spills.  We’ve come a long way in 75 years.  Hug your toilet, take in that breathtaking waterfront scenery, and let’s all make sure that future generations inherit clean waterways.